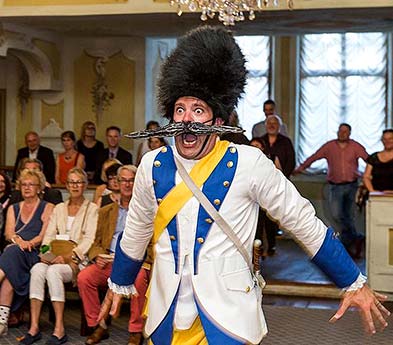 Antoine Dauvergne (1713–1797) was born in Moulins in the province of Auvergne, France. He probably received his initial violin training from his father. In the late 1730s, he moved to Paris, where he gained recognition as a performer and composer (his mentor was Jean-Philippe Rameau). The majority of his early works were written for the chamber formation made up of the violin and basso continuo instruments, in line his own inclination, as well as with a view to meeting the demand on the printed sheet music market. In 1751, Dauvergne was promoted from the post of the violinist to the director of the Académie royale de musique (the name of the Opéra de Paris prior to the French Revolutin), as a result of which he was afforded the opportunity to compose stage works. He created ballets and operas, primarily the grand-scale five-act tragédies lyriques, but his oeuvre also contains cantatas, motets, violin and trio sonatas. The greatest acclaim and popularity from among his pieces was earned by his 1753 one-act comic opera Les Troqueurs. Until the late 1780s, Dauvergne’s career was thriving, as he occupied prominent positions at the major French music institutions. In addition to heading the Académie royale de musique, between 1762 and 1773 he served as the director of the Concerts spirituels, an influential public concert series, attended by the French aristocracy, wealthy bourgeois and foreign visitors to Paris. His career was cut short in 1789 by French Revolution, which led to dramatic social changes. In 1790, Dauvergne moved from Paris to Lyon, where he would spend the rest of his life.

With regard to his professional path, it is rather paradoxical that Dauvergne did not create his most lauded and most noted opera for the prestigious Académie royale de musique, but for the much humbler (competing) Théâtre de la Foire Saint-Laurent, one of the two venues used by the Opéra-Comique, which in 1714 acquired a licence to perform on its stage comedies with inserted songs and dance scenes. Unlike the performances at the theatres founded by the king (Comédie-Française and Académie royale de musique), the shows hosted at the Théâtre de la Foire Saint-Laurent were attended by lower-class, and more heterogeneous, audiences. Accordingly, the operas it staged were mainly simple-structured, with their musical numbers not being original, but taken over from vaudeville comedies and supplied with new texts. Owing to its quality, Dauvergne’s Les Troqueurs was exceptional in this respect, and is deemed to be a landmark work in the French comic opera tradition. To a large extent, it was a positive outcome of the “Querelle des Bouffons”, a battle between rival musical philosophies in Paris, which was sparked by the reaction of the local literary circles to a performance of Giovanni Battista Pergolessi’s buffa La serva padrona by an itinerant Italian troupe at the Académie royale de musique in the summer of 1752. The show was a triumph, yet it also gave rise to a controversy between the defenders of the French operatic tradition and the champions of Italian music, who attacked the stiffness and artificiality of tragédies lyriques. Even though the criticism mainly aimed at tragedy, it would soon include French opera in general.

The situation was taken advantage of by Jean Monnet, who at the beginning of 1752 was appointed director of the Opéra-Comique company. According to his memoirs, he contacted the librettist Jean-Joseph Vadé and asked him to write a text for an opera based on a tale by La Fontaine. Monnet wanted to entrust the music, which was supposed to be in the spirit of Italian buffa, to a French composer, with Antoine Dauvergne appearing to him as the most suitable candidate. Dauvergne allegedly completed the new work within a mere 15 days. Anticipating that the vehement advocates of Italian opera were likely to reject everything French out of hand, Monnet resorted to a ruse: he spread the rumours that he had commissioned the libretto from an Italian composer living in Vienna, who had a good knowledge of the French language. Les Troqueurs was an immediate success, and Monnet, with a degree of malignity, enjoyed the praise on the part of the tricked Italian opera partisans, although when he revealed the deception they were furious. When it comes to Dauvergne, he adroitly brought to bear the buffa techniques, unprecedented in French comic opera, including melodies, sung recitatives, arias (or rather ariettas) da capo, as well as numerous ensembles. At the same time, he accommodated the taste of the local audience by incorporating a final short ballet number, a component that was inherent in the theatre forms in France at the time.

In a matter of fact, Monnet’s false claim that the opera was of Viennese provenience might have come across as credible. In the 1750s, French plays and comic operas constituted a significant part of the repertoire of the Burgtheater, in compliance with Empress Maria Theresa’s penchant for them, as well as due to the political objectives pursued by her Chancellor, Wenzel Kaunitz. After all, French was the prevailing (if not the primary) language of communication between the Austrian noblemen. The Burgtheater was regularly attended by Prince Josef Adam of Schwarzenberg (1722–1782), an ardent lover of music and theatre, who most likely saw there a performance of Les Toqueurs. The opera was first staged in Vienna in 1758, when the libretto was printed too. We do not know when precisely the Schwarzenberg copy was made, yet as the family usually procured transcripts of new works shortly after their premieres in Vienna, we can conjecture they did so in this case too. The Schwarzenberg music collection contains copies of the instrumental parts, which suggests that the material was not only intended for exploration but also served for performances. After all, Les Toqueurs, a relatively easy-to-stage one act opera, featuring merely four protagonists, was suitable for household shows. And if the Schwazenbergs held its performance some time at the turn of the 1750s and 1760, the actors had to make do with the premises of one of the family’s palaces, since the Český Krumlov Castle theatre was too dilapidated at the time (before it was revamped and given its current appearance).